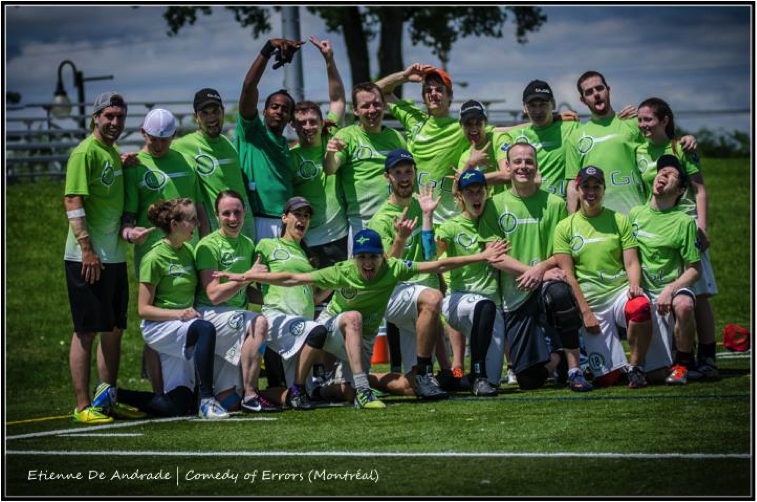 GLIDE won its first major tournament at Comedy of Errors 2014 in Montreal!
Day One had us in a tough pool. We narrowly scraped out an indoor win against MagnetX, then fell on universe point to both Bebop and Crash. Seeded 3rd in our pool, we won a crossover against MaxPower and our common enemy, the flying poplar fluff!
We came into Day 2 matched up against 1st-seed Tribe Ultimate. The lessons learned on Day 1 really paid off; Glide came out with our strongest start yet, taking the game 15-4 to move into the Top 4 bracket.
We faced Undertow (YARRR) in the semis, once again seeing that zone that we remember so well from 2013. This year, we were ready for it, taking the game 11-6. We met Local 613 in the finals. These guys made a scary comeback, but Glide managed to stop their momentum to win the final 15-12.
Some highlight reel plays from the weekend:
1) Universe point against Bebop. We turn the disc, chaos ensues as we try to pick up on D. Their speedy fast guy bolts towards the endzone corner. He's wide open. Handler puts up the disc - everyone is thinking "it's over, he's going to catch the disc in the endzone. we're toast". Out of nowhere, Karyne emerges in front of the guy and pulls out a wicked layout D. Safe for now!

2) Final game. Local 613 seems to be catching up with a few consecutive points.... we need to score. We're on O. The disc is up in the air, Eric goes up for it and fumbles it as he's jostled by the defender - it's a turn right by the line and there's a collective sigh as we now need to get that disc back. Dude with the disc winds up for a huck and releases, and BLAMO - Eric gets a layout handblock to get the disc back for us. We score the point!

We had a heck of weekend; thanks to the tournament organizers and our competitors - see you all at Ontario Regionals 2014!!!
Posted by Glide Ultimate at 7:56 AM

Email ThisBlogThis!Share to TwitterShare to FacebookShare to Pinterest
Labels: Tournaments 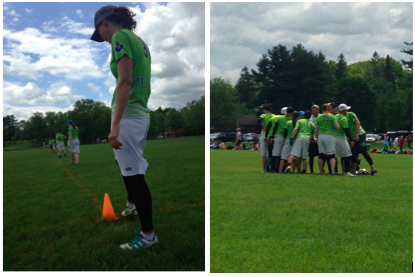 A mixed Glide-Hustle team attended Mixed Easterns in Boston on May 31-June 1. This was the team’s first international tournament, and it was a great experience. The competition was tough, the fields were lush, and the weather was sunny! We went 2-2 on Saturday, going down 15-6 to Wild Card and suffering a tough Universe Point loss to Lionside. We then beat Spawn 12-8 and won our crossover to remain in the Top 16.


After playing four 2-hour games Saturday, our small roster of 16 was feeling the fatigue on Sunday. We went all-out in our first game against 6th-seed (7-Local), but lost 12-10 at Soft Cap. We didn’t have the legs left for the last two games, falling to Lionside and Bam to end up finishing 15th.


We’re looking forward to our next tournament at Comedy of Errors in Montreal where we will be showing up with a full team, ready to compete!
Posted by Glide Ultimate at 6:49 PM 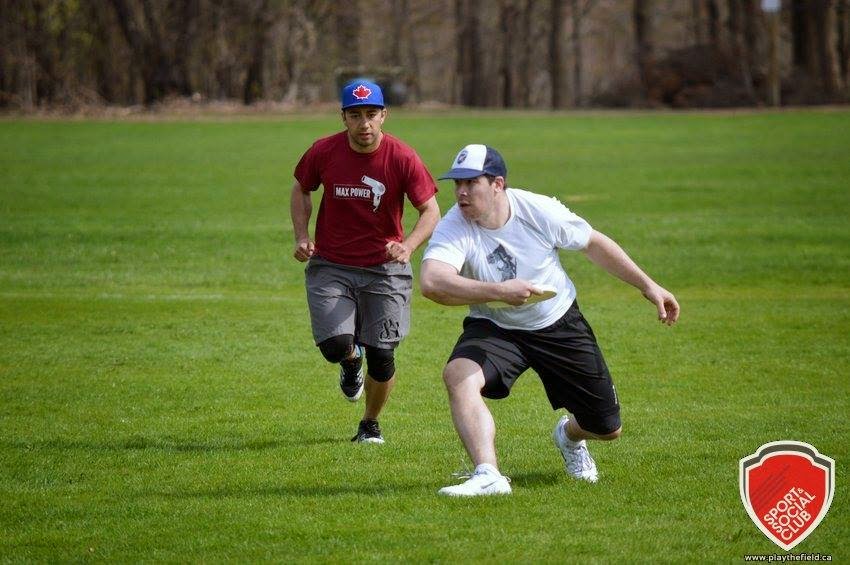 HUSTLE - Glide's sister team - had its inaugural tournament with STELLAR SUCCESS!  Seeded at 11th going in, HUSTLE (well more like 2 lines of Hustle and 1 line of Glide) met up with rivals NoBS who was our pool's first ranked team, meeting them both on day one and day two gave a good gauge on HUSTLEs weekend development.  In game 1 our opponents' defence proved effective and held us to a 9-12 loss despite tenacious effort.  HUSTLE learned a ton, and took it the next 3 games employing a new defensive strategy.  Modifying on the fly our D-line stole the spot light and rolled through opponents with absolute tenacity going 3-1 on the first day.

Day 1 Recap:
- Loss to NoBS 9-12
- Win over Undertow 13-8
- Win over Thunder 14-6
- Win over Max Power 8-6
On Day 2 HUSTLE was now being commonly referred to as GLIDE despite our many corrections to the contrary. Our first game was against what would become the first place finishers, TRIBE.  This game proved that HUSTLE had earned its name not merely through choice but action.  Much like GLIDE's inaugural season HUSTLE chose to fight to the very end, grinding out a 25+ minute point against what would become the tournament champions.  Unbelievable heart.

Our second game was a much wanted rematch, 4 games later we had learned an enormous amount and HUSTLE took to the field determined.  A much improved performance, HUSTLE grinded point for point scoring the final 2 points on O and D to tie it up at the horn.  Despite a loss on universe it was a solid day.

Live in Ottawa or Gatineau?

Come play for one of OCUA's competitive alliance teams:

Our 2014 tryout process is now over! The preliminary roster list will unfold in the coming days or weeks as we mull over all the impressive talent and make some tough decisions.

A big thank-you goes out to all who came out and gave it their best! This year's crew knocked our socks off! We had over 100 people register for tryouts, and some 70+ attendees over three scrimmages. The amount of talent in the Ottawa-Gatineau ultimate scene is insane. There were easily enough people at our tryouts to form two high-level competitive teams. But alas, we have decided to stick to one team for the 2014 summer season, and oh boy will it ever be a good one!

Thanks again to all! If you didn't make it at this present moment don't take it hard and don't give up, and remember the great lesson of Michael Jordan. If you missed our tryouts and think you are right for Glide, please do not hesitate to get in touch.

We'll be posting our roster when the time is right. For now, see y'all on the pitch, and good luck to all the other competitive mixed teams out there!
Posted by Glide Ultimate at 5:57 PM