GLIDE is a competitive mixed ultimate team based in Canada's Capital Region.

OUR MISSION
Our players come from throughout the Ottawa valley, the city core, and Gatineau. Our mission is to compete at the Canadian Ultimate Championships (CUC) and improve upon our 2013 ranking (9th in Canada and the 2nd highest ranked team in Ontario after the National Champs, Union). CUC 2014 is being held in Waterloo, Ontario.

There is a whole lot of talent in the Ottawa-Gatineau ultimate scene. OCUA is supposedly the largest urban ultimate players association in the world, and so GLIDE aims to maximize the opportunities for players of the region to compete competitively at the National level.There are two main themes that differentiate GLIDE from other competitive mixed programs:

First, while we certainly emphasize competitiveness, our first priority is positive game play. As athletes we know we improve best when our team is constructive and we're all enjoying the sport!

Second, our team emphasizes a flexible level of commitment. This means that there are opportunities to play as much ultimate as you can handle (through planned scrimmages, affiliated league teams and regional tournaments); but it also means that if you don't have time to commit your entire life to ultimate for whatever reason (be it busy weekends, family commitments, a demanding job, low cash flow, etc.) you're not going to get hassled by anyone. In short, as players we are entrusted to determine the level of commitment that works best for both us personally and the team as a whole.

In terms of our playing style (and without giving away any strategy): GLIDE is made up of very athletic players who are smart with the disc. The "athletic" aspect allows our defence to frustrate other teams. The "smart" aspect allows us to retain the disc on offense and keep turnovers to a minimum. 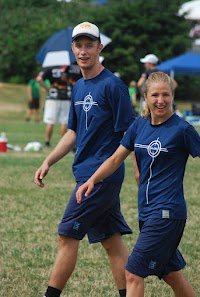 We hold practices on select weekends during the Spring between seasons when everyone has the most free time, and before everyone becomes busy with vacations, league and summer activities. Our summer practices are less frequent and scheduled around tournaments to make it as convenient as possible for the membership.

We also have a number of GLIDE-based teams in the OCUA weeknight leagues, which doubles a different kind of practice for those that have the time and desire more field time (last summer our Monday team came in 5th and our Wednesday team finished 3rd; meanwhile, GLIDE-affiliated team Cruisin' cleaned up the Monday league and went on to win the Godzilla title). GLIDE requires fitness but trusts that people will stay fit on their own time. Our practice time is valuable, and we use it to the fullest on developing flow.

GLIDE aims to attend local and regional tournaments (CHEO BBQ tournament, Comedy of Errors, and Mixed Up) as well as Ontario Regionals and Nationals.

HISTORY
GLIDE's first run at high level competition was in the summer of 2011. The team was largely the brainchild of Jason Solomon, long-time ultimate-obsessed member of OCUA, who observed that there was a tremendous amount of high-level players in the region who wanted to play at a competitive level but who - for whatever reason - did not have a home team. Jason continues on as 'coach' while the team shares a number of organizational and administrative tasks and captaining responsibilities.

Our resolve as a team was only strengthened from an impressive performance in our first season. We attended a number of local and regional tournaments and rose to the top as Britannia Beach Champions 2011 and Goosebowl 2011 Champions. At regionals we came within one or two points of beating the third, fifth and sixth seeded teams in Ontario. Sadly, only the top six teams qualified for Nationals and we finished a close seventh (read a recap of regionals 2011 at the I Am Ultimate Blog).

Our second season in 2012 was a huge success. A very strong showing at Comedy of Errors (Montreal) flowed into extremely strong results at Regionals, where we went to universe point against the eventual second and third place qualifiers. The good news was that we ended up qualifying for Nationals! We went into Nationals in Victoria seeded 15th of 16 teams. Three hard-fought days led to a terrific 12th place finish... allowing us to finish well ahead of our initial seeding. Our Glide-affiliated teams continued to perform well in the OCUA leagues and other regional tournaments, with the Glide-affiliated 'Wolf Pack' going on to win Harvest Tournament 2012 and 2013.

The 2013 squad was the strongest yet. We finished 4th at Ontario Regionals and TUFF, 3rd at Comedy of Errors, 2nd at No Borders, and 9th at CUC in Vancouver (which currently places us as the 2nd highest ranked team in Ontario after the national champs - Union).

The 2014 Glide squad will inevitably be a mix of the returning core veterans and new talent in what is likely to be one of the best ultimate teams in the country.

JOIN US
We hope to see you in a GLIDE uniform this summer! If you are interested, please get in touch with the team captain, Jason Solomon.